Orders with beer can be shipped direct to customers in Ohio, Kentucky, District of Columbia, and NOW North Dakota!

In the beginning, there was an innovative West Coast brewer by the name of Pete, who developed a wicked-good and groundbreaking beer that became known as the defacto-standard American Brown Ale. It boasted an abundance of specialty malts and Brewer’s Gold hops to create a great taste previously which was unbeknownst to mankind. Now, together with Pete we have created Re-Re-Pete 3X as a triple version to pay homage to the innovative energy of American brewers and deliver a great historic beer to true beer lovers! 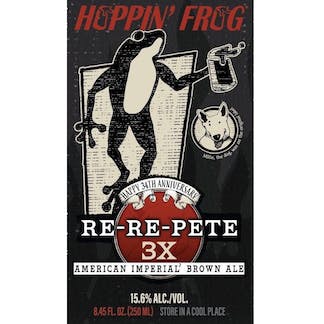